The basic goal of Tenniquoits is to throw a ring of solid rubber with one hand over a net into the opposing half of the court in such a wise, that the ring hits the ground or the opponent is unable to catch, control or return the ring. While the continuous alternation of throw and catch of the ring during a match, the players of Tenniquoits combine a variety of different techniques to shoot and types of defensive and offensive shots with a skilful manner to catch a receiving ring with one hand. A typical offensive shot for example, is a long shot with spin, thrown as a kind of lop into the back part of the opposing half of the court or a short shot with spin, thrown narrow across the net into a corner of the front part of the opponent’s half of the court. A typical defensive shot for example, is a high throw without spin, thrown into the back part of the opponent’s half of the court in order to keep the opponent away from the net. To present an attractive, fast and sportsmanlike match, all actions of the players have to be executed in fluidly motions without unacceptable delays during the process from the receiving to the delivery of the ring. In order to dominate the match, it is essential to gain an advantageous position close to the net, from where the player is capable to attack with an effective shot. The move to the net is realised by catching a high and long played ring with a stretched arm above the head or behind the body while the player jumps forward. A match between offensive players is characterised by a fight of position and ring with the permanent alternating attempt to press the opponent and open space at the corners of the opposing court half, where to make the point. For tactical reasons it could be also successful for a player to restrict the main efforts to catch the ring and return it with a defensive throw into the back part of the opponent’s court half. With this, a defensive player is able to force the opponent to make mistakes or to make points by counterattacks. The International Tenniquoits Rules are obliging for all international events under the leadership of the World Tenniquoits Federation. Moreover, this rule-set could be a helpful guideline for other countries, which are currently not organised concerning this sport, to introduce Tenniquoits into their landscape of sports and to become a competitive member of the World Tenniquoits Federation.

Height and Position: The net is positioned in a height of 1.65 m above the center-line and divides the court into two equal halfs. The above specified height has to exist at any point of the upper edge of the net, measured from the floor. Quality and Measures: The net is a close meshed canvas of cotton or synthetic fibre with a length between 5.50 and 6.10 m (meshed area) and a depth between 0.40 and 0.70 m. In case the meshed area of the net is longer than 5.50 m, the extension beyond the side-lines has to be equal in both directions. The upper edge of the net should have a different colour than the rest of the net. Fixation: The net has to be fixed with a cord or hanger at two vertical posts of firm steel, respectively one placed on each side of the court upon the marked or imaginary center-line with a distance of approximately 30 cm from the side-lines. The posts shouldn’t outrange a height of 1.70 m (measured from the floor) and must be qualified to warrant a strained net

The Ring Material and Quality:

The ring is produced of white or yellow solid rubber without air inside and has a plain and firm surface, which qualifies it for fast rotations without losing stability during the flight through the air. Weight and Dimensions: The ring, authorised by the World Tenniquoits Federation, must have a weight between 190 and 220 grams, an inner diameter between 11 and 12 cm, an outer diameter between 17 and 18 cm and a thickness of 3 cm (diameter). The thickness is allowed to vary plus or minus 0.5 cm. Imprint Links: The WTF website contains links to websites of other organisations. When establishing these links to external websites, the authors reviewed these websites and affirmed that no illegal contents were visible at that time. The WTF is not responsible for the contents, correctness or accuracy of linked pages and not liable for illegal, incorrect or incomplete contents and especially not for damages that arise from the use of the information offered on the linked pages.

The purpose of the game of ring tennis is to throw the ring over the net into the opponent’s field in such a way that the opponent cannot catch it and throw it back.

2.2. The playing field in doubles is 12.20 m long and 5.50 m wide. The dimensions for the restricted area correspond to the individual field.

2.3. The locking space is unlimited in the lateral extension.

2.5. There is a net suspended from two vertical posts above the middle of the playing field. The net is 6.00 m long, so it extends over the side lines by 25 cm. The net height is 1.55 m and must be taut.

2.6. A safety distance of 3.00 m (in accordance with the Gymnastics Regulations, Framework Regulations Appendix 3) must be kept free around the playing field. If the local conditions do not allow it, it can be deviated from. 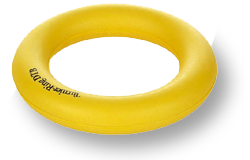 2.8. The provisions of these rules apply equally to players.

3.1. It is played according to time. The playing time is two times 10 minutes in the age group men / women (age 19 and older); 8 minutes twice for all remaining games. Youth (M / F 14) play twice for 6 minutes. The tournament management is responsible for the timekeeping.

3.3. Time lost due to an interruption must be replayed in the relevant half. The referee is responsible for this timekeeping.

3.4.1. Injury does not count as a stoppage of play. In the event of an injury, the referee must ask the player to continue play. If this is not possible, the game must be aborted. The injured player is no longer allowed to participate in further games of this type of competition. For team championships, section 11.4.4.4 of the rules of the Games Department (OFS) applies .

3.4.2. If a player develops bleeding wounds during the game, the referee must stop the game to allow treatment to stop the bleeding. Section 3.3 applies to the time lost due to the interruption. The ring must be cleaned or replaced before resuming play.

4.2. The players or teams must compete in uniform club clothing (club jersey with club crest or club print). Long training pants or tights are allowed as club clothing, but these must be uniform for a mixed or double.

4.3. The playing field sides are drawn by lot. Whoever loses the choice of side has the first task and ring choice. After half time, place, task and ring election change.

4.4. If only one player from a team competes in a doubles or mixed game at the start of the game, section 4.1.3.4 ff. Of the rules of the Games Department (OFS) apply.

4.5. A supervisor (trainer) is allowed behind the field during the game. The distance to the field must be at least one meter.

4.6. The supervisor (coach) must have the referee write his name on the referee sheet before the start of the game.

4.7. He may only tell his team the time during the current season. Intervening in the game by means of optical and acoustic signals or anticipating a decision are not permitted.

5.1. The ring must be given up again by the player or one of the doubles / mixed players who gained the advantage.

5.3. In doubles / mixed, the players can take turns in the task at will.

5.4. The referee re-opens the game with each task. This is done through eye contact, hand signals or the request: “Please give up”. If the task is carried out without waiting for the referee’s approval, the referee can have the task repeated.

6.1. Every mistake gives the opponent an advantage and is rated with a “ring”.

6.2. The winner is the player (the double / mixed) who has scored the most “rings” during the entire playing time.

A player makes a catch mistake

7.1.1. when the ring touches the floor of one’s own playing field (technical term “floor”);

7.1.2. if the caught ring touches the ground at any point (technical term “ground”);

7.1.3. when the player last touches the ring that falls to the ground in the restricted area or outside the playing field (technical term “touches”);

7.1.4. if he catches with both hands, at the same time or one after the other (technical term “double catch”).

The hand is the area from the fingertips to the elbow. Catching with the same hand and with the help of the body is allowed.

When catching in a doubles / mixed, both players may be involved. The two players only commit a “double catch” when one of them touches the ring with both hands.

A player makes a throwing error

7.2.1. if he throws the ring outside of the opponent’s field of play (technical term “outside”);

7.2.3. if the ring is not thrown over the net by hand (technical term “incorrect throw”);

7.2.4. if the ring does not maintain its flight position after being released and overturns or wobbles significantly – more than the width of the ring – (technical term “wobble ring”);

7.2.5. if he throws the ring from above, ie the ring is pulled down, pushed or thrown (technical term “from above”);

7.2.6. if the movement sequence is stopped (interrupted) at any point in the lead or throw phase (technical term “stopped”).

Catching the ring is finished when you close your hand around the ring.

The ring must be brought into the lead phase immediately after being caught and must always be in motion relative to the body.

Interruptions (delays) that arise are permitted

After a permitted interruption, the player who caused it must throw the ring high into the back third of the opposing field. If the game is interrupted by the referee (technical term “stop”), the game must be played twice up into the back third. This is where the disadvantaged player begins.

7.2.8. if he changes the direction of the throwing movement or the type of throwing during the throwing phase (technical term “two movements”);

7.2.9. when the ring touches the ceiling during indoor games (technical term “ceiling”).

A player makes a mistake

7.3.1. if he runs, dribbles or walks in the direction of the net after catching the ring (technical term “step error”); After the ring has been caught, two feet are allowed to make two ground contact. The ring must be played before the third ground contact occurs. Every foot that touches the ground counts as ground contact.

7.3.3. when he enters the restricted area or its lateral extension (technical term “crossing”);

Unsportsmanlike conduct is considered to be, for example

After the third error due to unsportsmanlike conduct, a field reference is made. In the event of a gross violation, the field reference can be made immediately. Further punishment is regulated in section 5.1.2 of the rules of the Games Department (OFS) .

Each competition is led by a referee who can be assisted by two linesmen. The linesmen have to stay at the edge of the field at the level of the back baseline and only announce their decision after being questioned by the referee. The referee should be at the net post. He opens and closes the game and has the right to interrupt it (e.g. in the event of external disturbances, external ring in the field, changes to the playing field lines or the structure of the network, contact between the ring and devices in the hall).